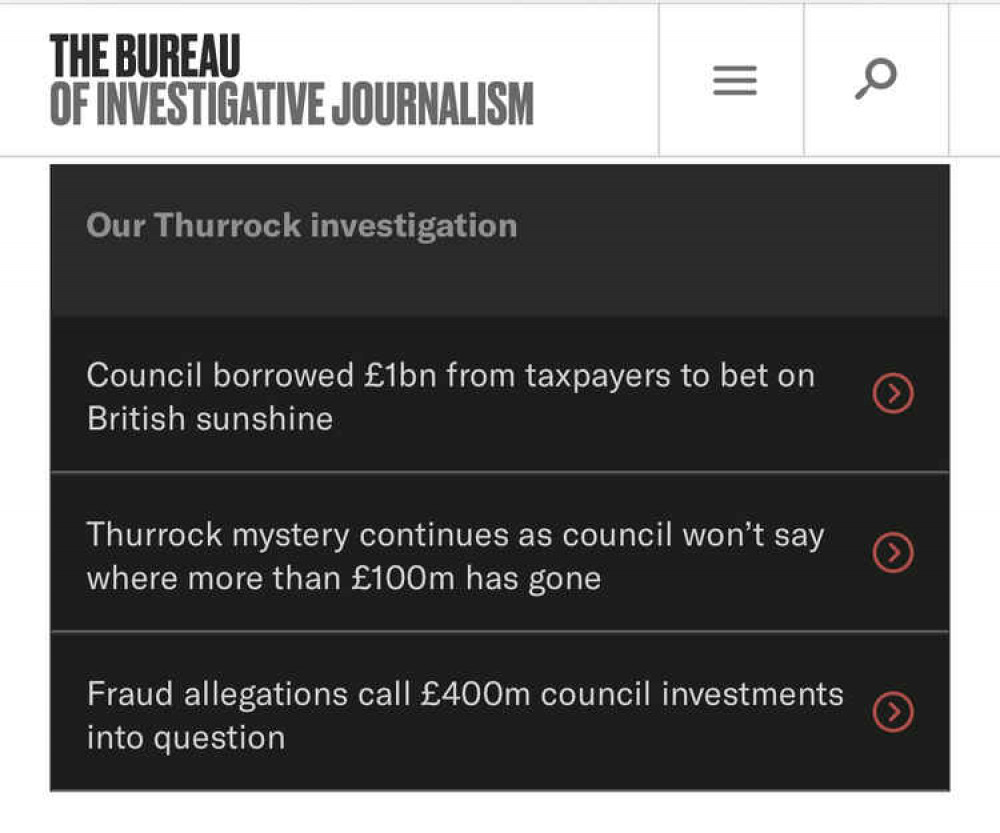 THURROCK Council is at the centre of a legal challenge in an attempt to lift the shroud of secrecy the authority has laid over how and why it has invested £600 million it has borrowed.

For almost a year the council has been at the centre of controversy over its investment policy - borrowing huge amounts of money at preferred rates in a bid to make a profit by reinvesting it.

The total amount if debt it has incurred is more than £1 billion and it proposes to double that!

Details of how around £420 million was invested has come to light in a court case, currently ongoing, in which a flamboyant super-car owning tax exile told how he netted £5 million in commission from council - which the authority has since said it was not aware of!

The story of the council's borrowing strategy was first broken by Thurrock Nub News in January and has since become an issue covered by national newspapers and other media.

At the forefront of detailed investigations into the council's borrowing has been the Bureau of Investigative Journalism, which is now going to a tribunal to try and force the council to release key details of how it has invested huge sums of taxpayers' money.

The council refused to disclose under the Freedom of Information Act who it borrowed from and what it invested in.

The Bureau says dealing with Thurrock Council has been an uphill battle, as it has refused FOI requests, kept vital information from councillors and even put the phone down when asked for comment.

However, the Information Commissioner's Office has ruled that Thurrock was right to withhold details of its borrowing and investments from the public, in part because disclosure could cause the council reputational and financial damage. The Bureau is now challenging this decision at a tribunal.

This isn't a story about one small UK council. This is about exposing systems that are corroding our democracy so we can demand accountability from those in power - Bureau of Investigative Journalism.

It is the latest in a series of barriers the Bureau has faced in its attempt to scrutinise how taxpayers' money has been spent by the secrecy-obsessed council.

A statement from the Bureau says: "At the outset spotted, in a little-used government dataset, the huge amount of money Thurrock had borrowed from other local authorities and the large sums it had invested in 'externally managed funds'.

"The dataset did not show which authorities Thurrock had borrowed from nor the specific schemes it had invested in.

"Thurrock's accounts provided little clarity, with just a single line stating that the council had £702m of 'long-term capital investment in the renewable energy sector'.

"Public reports and council meeting notes failed to shed much light on the issue, apart from a brief flurry around a solar park in Swindon in 2016 alongside a company called Rockfire Capital. (Rockfire Capital would turn out to be owned by financial entrepreneur liam Kavanagh, and is the company that received the £5m commission payment.)

"From 2017 onward the council said practically nothing specific about the investments it was making, even though vast sums were being spent. By March 2020, Thurrock had £815 million in bonds linked to the renewable energy sector.

"The Bureau had to look for alternative sources of information. We combined dozens of datasets, published by councils under transparency rules, and found £74m in payments from Thurrock to Rockfire by mid-2017 – far more than had been announced by the council. We also found loan and interest payments to about 150 local authorities.

"In October last year we interviewed Sean Clark, Thurrock's director of finance and the man directly responsible for borrowing and investments.

"Clark said "intermediaries" had come to him with money-making opportunities – but there is no public record of these meetings.

"In fact there was very little public scrutiny at any stage of the borrowing or investment process. Even elected officials were cut out, with Labour opposition leaders adamant that they never received the overview of investments mandated by the council's rules.

"Mr Clark is also responsible for deciding whether to disclose details about what he was doing under the Freedom of Information Act.

"Both of the Bureau's FOI requests on his borrowing and investment strategy were refused. The council said disclosing the information about the loans would prejudice its commercial interests, even though almost 40 other councils were happy to answer the same request, and revealing what it had invested in would put off potential business partners.

"As a result, more than £600m of Thurrock's investments are unaccounted for as the council has invested in schemes that it refuses to detail publicly

"The amount of money involved, the lack of transparency and accountability surrounding the deals, and the potential risks to public services should the investments turn sour seem to us to be strong public interest arguments in favour of releasing the information.

"The decision by the Information Commissioner's Office keeps taxpayers in the dark about how their money is being spent and the risks involved. It could set a precedent which would let other authorities hide similar information at a time when government cuts have forced councils to turn to riskier sources of income.

"Take, for example, Spelthorne borough council in Surrey, which borrowed £1bn from the public purse to buy high-end offices. While many of the deals were shrouded in secrecy at the time, the council did at least provide details of the purchases when the Bureau requested them under FOI. This helped us establish that the council had become reliant on commercial income to provide services.

"Earlier this month we revealed that auditor KPMG is considering seeking an unprecedented court ruling that the property purchases were unlawful.

"The Bureau has instructed Wiggin, a firm of media law experts, to help with our appeal against the Information Commissioner's Office decision, with the support of The Times, regional news publishers, and specialist publications such as the Local Government Chronicle and the Municipal Journal, as well as freedom of speech campaigners such as Index on Censorship.

"The matter is due to be heard by the First-tier Tribunal in early 2021."

Faith is honoured for inspirational efforts with youth award