Thurrock Council loses third bid to retain its secrets. Will the beleagured authority now open its books on a litany of dodgy dealing? 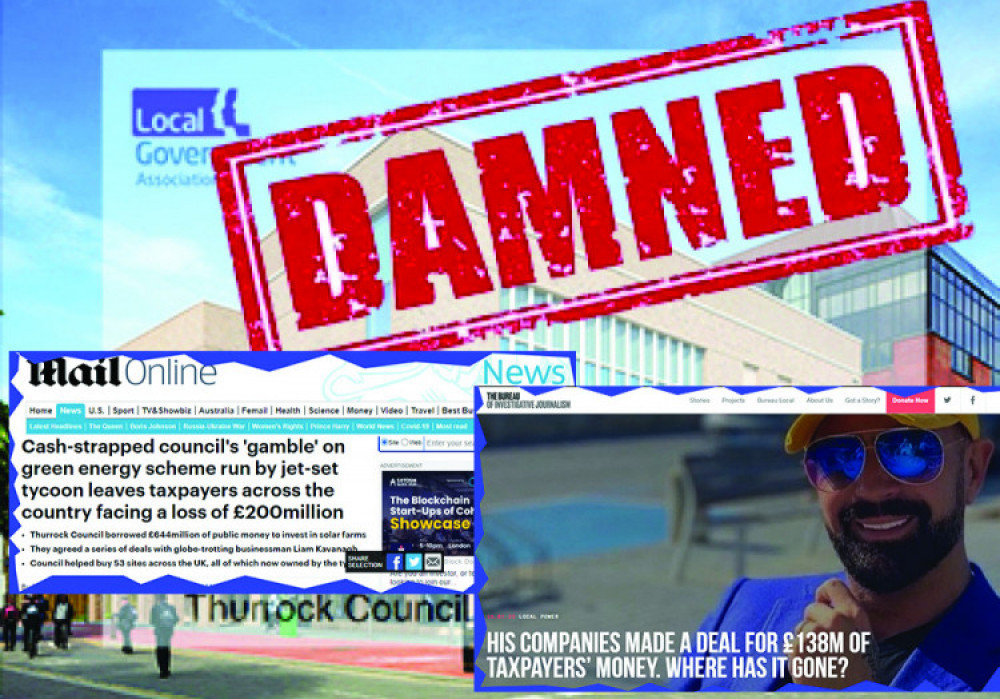 IN what is regarded as a major victory for democracy, Thurrock Council has been ordered to reveal exactly how it borrowed and invested more than £1bn of taxpayers' money.

For three years the council has wriggled and squirmed and spent tens of thousands of pounds on legal and bureaucratic costs as it has sought to avoid difficult questions about its finances.

The veneer of normality and a lack of wrong-doing that the council's Conservative administration has fought for so long to promote was blown away last month with news that the government has intervened because the council has committed catastrophic mistakes that have brought it to the brink of banruptcy.

And it has now been revealed that, for the third time, a tribunal has ruled that details of its dealing must be put in the public domain.

The battle has largely been fought by the Bureau of Investigataive Journalis, though other crusading lawyers and in particular Thurrock Council's opposition leader Cllr John Kent have also taken legal action to try and force the truth out of the council.

But the credit for much of the exposure and the pressure brought to bear must be credited to the bureau - and in particular its outstanding and award-winning journalist Gareth Davies.

Having lost the initial appeal to an inform,ation tribunal, Thurrock Council apealled and lost a second time. It then refused to reveal infor,mation and applied to a judge-led information rights tribunal in the hope of striking third time lucky.

In its judgement the tribunal says there was a "powerful public interest in public authorities being open about their activities and accountable for them", and suggested the council had withheld information from the public eye in order to avoid embarrassment.

Cllr Kent said it was "disgraceful" that the council had spent so much time and money trying "to keep as much detail of their dodgy deals secret".

This is the report of Gareth Davies:

The judge-led information rights tribunal said the dealings should be disclosed due to their "wholly exceptional scale" and that the objection put forward by Sean Clark, the finance director who arranged the deals, "bordered on the absurd". The panel noted his "worryingly casual attitude" towards keeping councillors informed of the investments he was making.

Thurrock now has until 28 November to disclose the information, which will provide vital insight into a policy that has put the authority in "grave danger", according to the council's new leader.

The ruling may also make it more difficult for public bodies across the UK to use commercial sensitivity as a reason to keep the details of their financial dealings secret. "I don't know what Thurrock council thought it was doing fighting this FOI dispute," said Thurrock MP Jackie Doyle-Price in response to the decision.

"The council should not be hiding behind commercial sensitivity as a justification for withholding information when the risks associated with that are borne by taxpayers.

"I fear this secrecy has allowed Thurrock's financial position to become exposed as it has got in the way of appropriate challenge."

In October 2019, the Bureau of Investigative Journalism asked the council under the Freedom of Information Act which other local authorities it had borrowed £1bn from and, later, where exactly it had invested the money – key details that had not been made public while the deals were being agreed.

Thurrock refused to disclose the information, a decision upheld by the Information Commissioner. The Bureau's challenge to that ruling was eventually considered at a hearing in July this year.

While appealing for the information to be released, the Bureau undertook a major investigation that exposed how the council provided £655m to companies owned by a single businessman, Liam Kavanagh. He has denied any wrongdoing.

The investigation prompted the government to take urgent action in September, stripping Thurrock of some of its statutory powers and placing its finances under the control of Essex county council. In addition, then-council leader Rob Gledhill resigned, Mr Clark was suspended and chief executive Lyn Carpenter was placed on extended leave. Essex county council is now investigating, with a report due to be submitted to the government by January. Thurrock has since committed to borrowing nearly £850m from a Treasury-run lending facility, at significantly increased rates of interest, to repay the local authorities it borrowed from. This month, the council's deputy chief financial officer, Jonathan Wilson, suggested that there would be a "significant write-off" and the council could be counting the cost of any government rescue package for at least 20 years.

The information that Thurrock refused to give to the Bureau three years ago included a list of all the investments at the heart of this crisis, which extend far beyond the deals with Kavanagh and his companies.

The tribunal, led by Judge Anthony Snelson, said it saw little to no commercial sensitivity in the details of these dealings: where the money came from and went, the sums involved and who helped broker the deals. It said the council had "weighty legal and constitutional responsibilities" and had avoided being held to account because of its lack of transparency.

It added that Thurrock's borrowing and investments were a "matter of special public interest not only locally but nationally".

The panel did, however, agree that two of the details requested were indeed exempt from disclosure due to their commercial sensitivity - the exact interest rates of each loan, and the projected yields from each investment.

Thurrock has repeatedly insisted that council members were kept informed about the investments Clark was making in line with an agreement made in October 2017. The tribunal, however, said it saw no change after that date in the information shared by Clark, who instead preferred to brief the leaders of the three political groups in "private, unminuted, undocumented meetings".

The tribunal added: "We have noted that the leader of the opposition group has alleged publicly that elected members were kept in the dark about what was being done in their name."

"We find Mr Clark's attempts to explain the secretive position which the council now adopts less than convincing," it said. "We cannot avoid the sense that it stems in material part from a wish to avoid the embarrassment which public scrutiny of its remarkable financial activities would be likely to involve.

"The exemptions from the right to freedom of information must not be invoked as a means of sparing public bodies and their employees discomfort of this sort."

The council, represented at the hearing by a KC, will now decide whether to appeal the tribunal's decision or release the information. At a full council meeting last week, the first since the government intervention, newly elected leader Mark Coxshall promised "a new era of openness, transparency and honesty".

Meg Hillier, a Labour MP and chair of the Public Accounts Committee, welcomed the tribunal's decision.

"Sunlight is the best disinfectant and failures of financial management on this scale can only really happen in shadow," she said. "Local and national taxpayers alike deserve and must be given transparency.

"It should never take three years, yet more taxpayers' money blown on pricey lawyers and civil society resources wasted to wring this public interest information out at tribunal." Cllr Kent said: "You simply can't have a properly functioning democracy without honesty, openness and transparency. Governments and councils need to be held to account and that just can't be properly done within a culture of secrecy.

"Disgracefully, Thurrock council has spent three years – and hundreds of thousands of tax payer pounds – fighting through the courts to keep as much detail of their dodgy deals secret."

The Bureau's appeal was prepared with the support of Wiggin LLP and our journalist was represented in court by barrister Leo Davidson of 11KBW.

Elizabeth Wiggin, senior associate at the firm, said: "There is an overwhelming public interest in disclosure of the type of information sought by the Bureau, allowing scrutiny of the ways in which public money is put at risk and greater public understanding of the way in which their money is used.

"We are very proud to have supported the Bureau of Investigative Journalism in their dogged pursuit of freedom of information."

A spokesperson for Thurrock Council said it was considering the tribunal's decision and would provide a further response once it had been fully reviewed.