BLUNDER-prone Thurrock Council appears to have made yet another gaffe with one of its major multi-million pound projects – this time right out of the realms of 'you couldn't make this up.'

It is reported that the centrepiece of the council's new civic offices extension - the new civic chamber where council meetings are to be held - has a major design flaw.

Built using materials right out of the top drawer and with all the latest gadgetry to allow top quality video enhancement of meetings, the new chamber looks super and will seat 35 councillors. The only problem is … the council has 49!

The council has thrown a veil of secrecy around the new chamber and has refused to answer questions about the seating arrangements from Thurrock Nub News, which came to light when some councillors visited the new chamber for the first time earlier this week. It will not confirm if the reports about a mistake in the number of seats available are true – nor has it denied them.

As well as the reported seating blunder councillors who have seen it have reported that the associated meeting rooms and offices for councillors are too small – while the Mayor's Chamber has been described as 'not fit for purpose' and is already reported to have caused a major row between the incoming mayor, Cllr James Halden, and other councillors in his group and officers when he saw it.

Cllr Halden and other senior members of the Conservative ruling group, responsible for the new offices which was built despite opposition from a majority of councillors who voted against it at full council, but they were overruled by the council cabinet which has executive authority, have not responded to a request to comment on the building now it is close to completion. 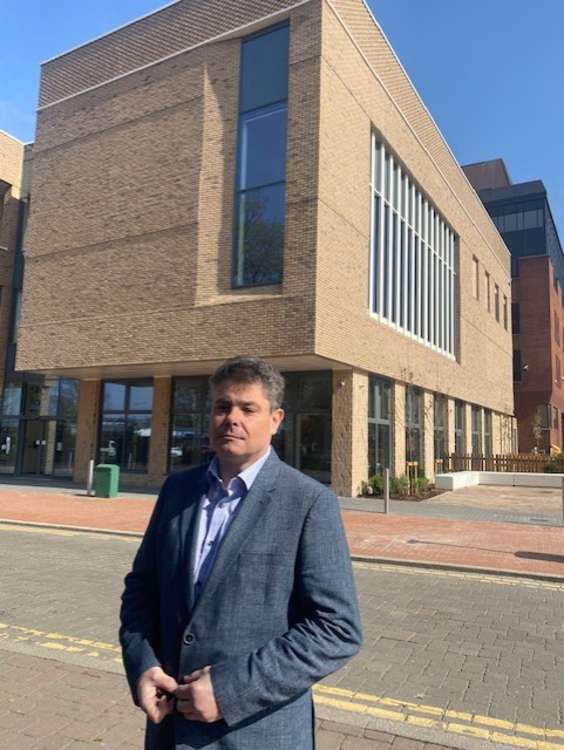 However, opposition members who have seen it have reported that while it looks great, it does not meet the requirements of the council as they see it – and there appears consternation at how the council can manage to lose 14 councillors when planning new seating!

Nub News has been told by an officer who works inside the building that there are design problems and that, to overcome the problem, the chamber may have to be extended – which will mean knocking down a wall in the newly-built building.

Today (Friday, 25 March), opposition Labour leader Cllr John Kent made an appointment to go and see the new chamber for himself but when he got there he was told his visit had been cancelled and he was prevented from accessing the chamber by security guards.

Cllr Kent told Nub News: "I can't confirm what I have been told by my colleagues as I am not allowed into the building, which seems a complete affront to the office of a locally and democratically elected councillor and I will be making a formal complaint.

"The only conclusion I can come to, as I have not been allowed in, is that what I have been told is true and this is a blunder of monumental proportions which ranks alongside – or perhaps even surpasses other failed and massively over budget projects like the A13 widening and Stanford rail station.

"To have a complete piece of clean paper to design a new building on and to get it so wrong just seems impossible to fathom. You have to wonder how this can possibly be allowed to happen, not just wasting money but exposing the council to continual ridicule."

The civic office extension was originally meant to cost around £10 million and was to have been paid for by selling off another part of the building. That plan has been scrapped and so the council has to foot the full bill for what has been described by its detractors as an 'unnecessary vanity project'. Latest estimates put the cost of the building at £26 million and it is expected to be much higher than that.

The new offices, built by Kier Construction, were designed by ISI Architects who produced details of their ideas in this online document.