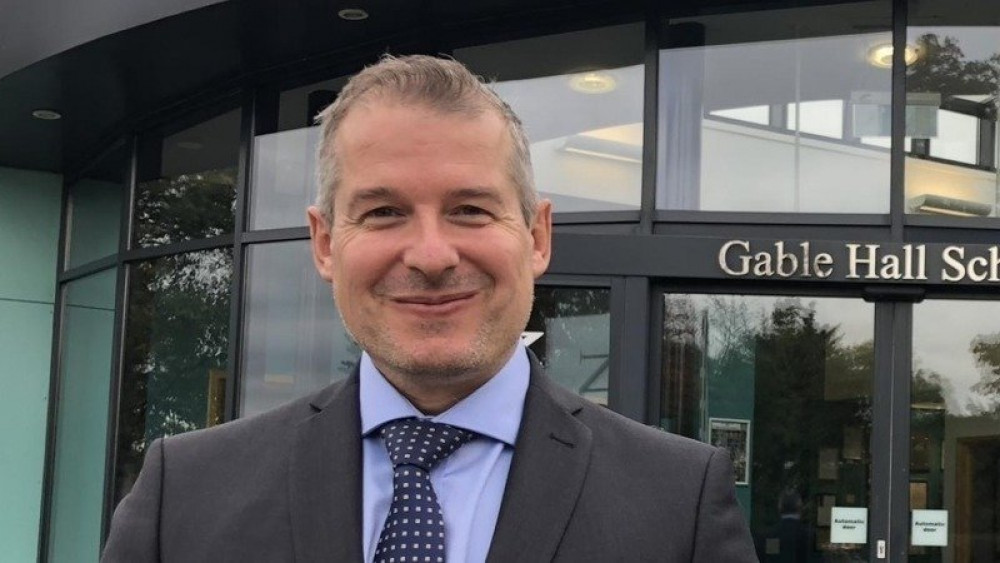 MORE than 1,300 signatures have been gathered on a fast-growing petition calling for the reinstatement of Ceri Evans as principal at the Ortu Federation Gable Hall School.

Mr Evans's resignation was announced by the school this week in a letter to parents. The news came in the wake of an Ofsted inspection report rating the school as 'inadequate'.

The school and federation have declined to make any public statement on the issue despite the wave of local protest.

The petition on the Change.org platform has been organised by local parent Madelyn Sharman-Cole who says: "Mr Evans has been forced out of his position and thrown under the bus!

"Mr Evans is an amazing headteacher who always puts our children first. Our kids and the whole school will really suffer without him."

The Ortu Federation chief executive, Dr Sophina Asong, in her letter to parents, says Mr Evans' resignation has not just happened, it was submitted and accepted in May. She gives no explanation why there has been a delay in announcing it.

The inspection that appears to have triggered Mr Evans' departure took place on 4 and 5 May and though the school and federation have known of the result for some time, it was not published until early July.

The report is particularly damning of safeguarding within the school and says: "The arrangements for safeguarding are not effective. Leaders have not consistently followed statutory guidance in relation to referring to the local authority designated officer when there is a staff allegation.

"They have not followed government guidance for incidents of peer-on-peer abuse or sexual violence and harassment. Leaders do not routinely check on the welfare of pupils who have been subject to harm. Sometimes, they do not provide support and challenge to those who have abused others. Furthermore, safeguarding records have gaps. Staff do not consistently record incidents, actions that have been taken or if any follow-up action by staff has occurred."

However, the report also says: "Pupils report that behaviour is much better than it once was and that they feel safe. Relationships between pupils and adults are positive. Pupils know who to go to when bullying occurs. They say that teachers deal with issues quickly to prevent repeat occurrences. Staff now have a consistent approach to discipline."

It does add: "However, leaders' actions and work to establish an effective safeguarding culture have not ensured that the most vulnerable pupils are not open to risk."

The full Ofsted report can be read via this link.

The report does not mention Mr Evans by name nor title. It frequently does refer to 'leaders' and says: "Leaders, including governors and trustees, have an overgenerous view of the quality of the school's provision. While they have asked questions of leaders, governors and trustees have not challenged leaders' strategic decisions in relation to the curriculum and its lack of ambition. Nor have they assured themselves accurately about the effectiveness of the school's arrangements to safeguard pupils."

That appears to suggest that problems within the school are rooted across its whole management and federation structure. Sources close to the school have told Nub News that Mr Evans is said to have robustly challenged some aspects of the report, behaviour been deemed unacceptable by the overarching administration leading to internal conflict that led to his resignation. Our source says Mr Evans' decision was an entirely voluntary one.

Mr Evans became head in 2018, following the reign of Clive Stokes, who succeeded Dr Asong when she became the federation CEO. 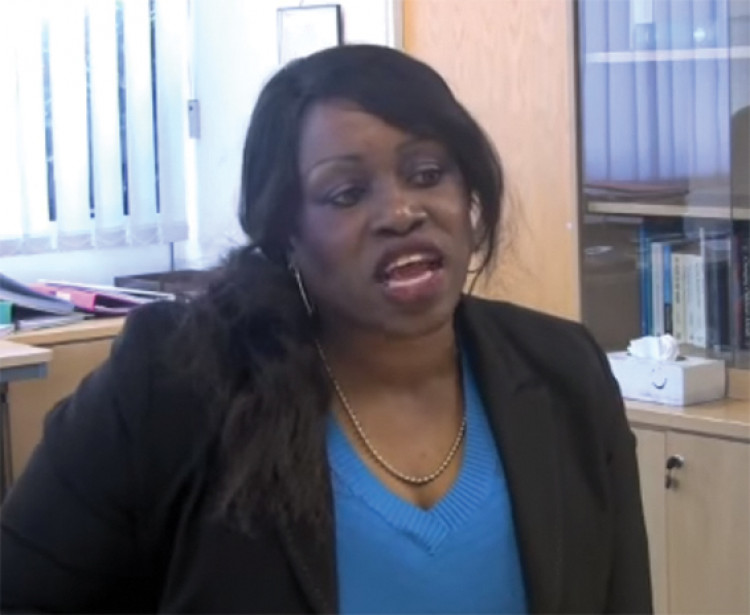 In her message to parents, Dr Asong writes: "Please accept our apologies for the late arrival of this letter, as we would have liked for it to reach you much earlier than this and for this we are truly sorry.

"It is our painful responsibility to inform you of the resignation of our principal Mr Ceri Evans. Mr Evans gave us notice of his resignation in May, which we have regrettably accepted.

"Mr Evans will be the first to tell you of the enjoyment, challenge, fulfilment and learning which working alongside parents, staff, present and former students have given him in his roles as teacher, leader and principal of Gable Hall across his years of service. We are all immensely grateful to him for his service.

"Come September, we will begin the collective task of reconfiguring our future for rapid improvement, starting with an externally conducted anonymous parent and student survey.

"We feel this is an important first step in our forward plan and we are keen that each part of our community plays a meaningful part in shaping the actions required to move our school from its current position.

"Gable Hall is, and will continue to be, a unique and special place in which to work and study because of who we are as a community and how we all dedicate ourselves towards ensuring our children are set up for life with the best possible opportunities.

"As a school we appreciate the significant role you play in that and therefore, as ever, should you have any questions or wish to speak to us, please email [email protected] and we shall arrange a mutually convenient time to meet with you.

"We now need to wisely look to the school's future with our customary resoluteness, determination and optimism with details being released as we know them in the coming weeks.

Dr Asong joined the school in 2011, stepping into the footsteps of John King OBE, who had guided the school into being one of the best in the country following his appointment in 1993. He achieved four outstanding Ofsted judgements as headteacher and he was awarded an OBE for his work in education in 2005. His work and leadership saw him take on the role of one of the government's education advisers, or school Czars as they became popularly known.

In an interview with the Your Thurrock news platform just after taking over in April of that year Dr Asong outlined her thoughts which can be viewed via the link below.

Dr Asong's arrival co-incided with the conversion of Gable Hall into an academy, which happened in July 2011. It became a multi academy trust in 2013 and in 201e the school was rebranded as Ortu Gable Hall, ortu being latin for "rising".

On her arrival she described becoming an academy as 'opening up vistas of opportunity'. Dr Asong said she had a ten year plan for the school, which opened up the opportunity to work with the students, staff and parents for the future of the school.

Dr Asong, had previously worked for five years as deputy headteacher and then acting head at Forest Gate Community School in Newham. The Federation describes her as 'a pacesetter, completer-finisher and shaper and a high achiever with a strong bent for distributed leadership. It says she leads an experienced and highly motivated senior leadership team.

Within a year of her arrival Dr Asong courted local controversy when she disciplined two students for having their heads shaved with a grade two cur rather than a grade three cut as they took part in a sponsored head shave for St Luke's Hospice.

The boys were put in teaching isolation until their hair grew. Dr Asong, who had given approval for the charity event and personally sponsored the boys, said they had knowingly broken school rules and added: "The decision by two students to raise sponsorship by shaving their heads was approved by the school provided it conformed to the school behaviour code.

"On the day the students came into school with their heads shaved, they admitted to staff that they had knowingly flouted the code and it is for this reason that they ended up being taught in isolation."

In a House of Commons debate in 2014, East Thurrock MP Stephen Metcalfe described her as 'a force of nature that I would like to see bottled and delivered to all parts of our school system'.

Like Dr Asong, Mr Evans has also experience of courting controversy and clashing with some local opinion. In September last year a social media post about a teacher at the school allegedly calling Year 11 students "retards", "cowards" and "chicken sh**s" in an assembly went viral. The incident was reported on Nub News here.

Mr Evans stated that "It has come to my attention that a member of my teaching staff has made derogatory comments to the cohort of Year 11 students. As a school, we do not tolerate or accept such behaviour."

The teacher was then suspended, pending an investigation. In response, some parents and ex-pupils came to the teacher's defence and campaigned for his reinstatement. The students who reported him were called "snowflakes" and "push buttons" and the teacher's suspension was lifted later that week.

Mr Evans brought that issue to conclusion by saying: "The investigation has now concluded, and following the school's disciplinary process, the teacher's suspension has been reviewed and lifted. This was an isolated event. Lessons have been acknowledged and learnt.

"We recognise the unacceptable choice of words used and apologise again for any upset caused."

Less than a year after he was the subject of a campaign against his decision by parents, the boot is now on the other foot.