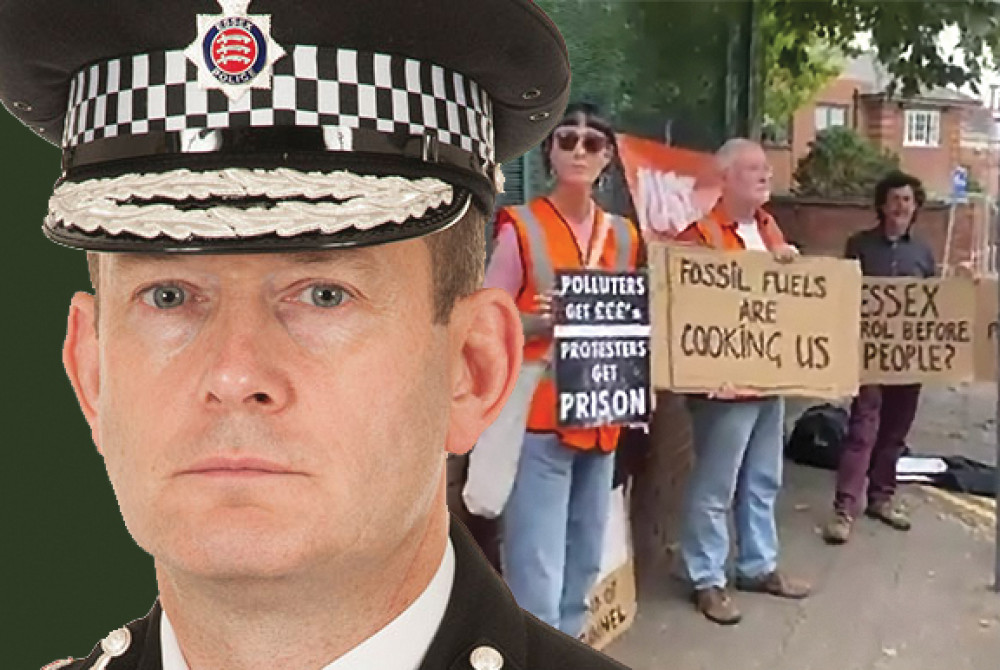 THE Chief Constable of Essex has delivered a personal message to Thurrock residents following two weeks of activities when his force has had to contend with disruption caused by eco campaigners in the west of the borough.

Nub News has reported extensively on the activities, which have included members of the JustStopOil campaign digging and occupying tunnels over Thurrock roads close to fuel terminals.

Chief Constable BJ Harrington says: "Over the last week I have read several articles offering commentary on the policing of climate protests. One of the emerging criticisms seems to suggest police officers are 'being too soft' and not taking decisive action to resolve matters in relation to protest.

"As the NPCC lead for Public Order and Public Safety, and the Chief Constable of Essex Police, a county that has been significantly affected by protests at Easter and in recent days, I felt it time to add my perspective.

"In recent days Essex officers have arrested 60 protesters who have employed disruptive and ultimately illegal tactics to highlight the cause of climate change. This includes protesters recklessly drilling tunnels underneath roads, causing significant disruption to communities and businesses as a result.

"As a result of the decisive action Essex officers have taken, nine of the protesters have already been charged with criminal offences and put before a court, with four being subsequently remanded into custody by magistrates.

"The investigation team are busy gathering evidence and preparing case files to put to the Crown Prosecution Service to secure charges against those protesters remaining on police bail. 16 protesters have been served with injunctions and a further ten are likely to face action relating to existing injunctions.

"For two weeks over the Easter holidays, Essex Police led the way in responding to similar activity, arresting over 461 protesters and securing a number of convictions, with further work ongoing to put those who committed criminal offences before the courts.

"In summary, Essex Police is not soft on illegal protest.

461 protesters were arrested over the Easter holidays in April 2022.

"I understand and share the frustrations felt by communities and local businesses disrupted by protest activity. The resolution to these matters, especially where protesters have tunnelled beneath the road surface, is not straightforward and is not a case of officers simply 'climbing in and dragging them out'.

"Removing protesters safely from potentially unstable tunnels, without endangering the lives of those we would be sending in, is a careful balance that must be found. In policing we face difficult decisions every day, assessing the risk to life and property and taking the right, proportionate action.

"The wider road network across Thurrock is open. Fuel and other essential services are getting through. The justification for entering a structurally unsound tunnel to effect an inevitable arrest, when doing so will increase the risk of serious injury or worse to both the protesters and those who seek to remove them, is simply not there.

"Let me be clear - the three protesters who remain in that tunnel in Thurrock are behaving in an unacceptable, disruptive and unlawful way. They will be arrested by my officers as soon as we can safely achieve that. We will present evidence of their criminality to prosecutors and seek to ensure they are held to account in a court of law.

"Essex Police senior officers have also taken a leadership role engaging across agencies to protect life, safeguard our communities, protect national infrastructure, protect and balance the rights of all and where right to do so arrest, investigate and tackle crime.

"British Policing is built on the principle of policing without fear or favour, treating all members of society and our communities fairly, independent of politics. The cause the protesters wish to highlight - climate change and the need to protect our environment for future generations - is one many of us will recognise and understand. Climate change is a real concern.

"In my force we are working on the electrification of our fleet and upgrading our buildings, improving insulation, modernising lighting and exploring the use of solar panels to reduce our carbon footprint.

"Even so, concerns about the climate - however real - cannot justify actions that seriously disrupt and endanger the lives of others. Whilst my officers are dealing with these protesters, they are diverted from other duties such as the prevention and investigation of burglary, robbery, sexual and violent crime.

"More widely as the national lead for public order I know that the same professionalism, diligence, and work goes on whenever there is protest, disruption and crime.

"I would like to thank Thurrock Council, the communities and businesses of Thurrock and the wider county for their continued support for the vital work our police officers, staff and volunteers do.

"I hope I have explained how these situations are complex and that we are doing our best to resolve this matter as quickly as we can."