Shoot the messenger and ignore the mould! Council plays down the impact of mould and damp and report says media is at fault 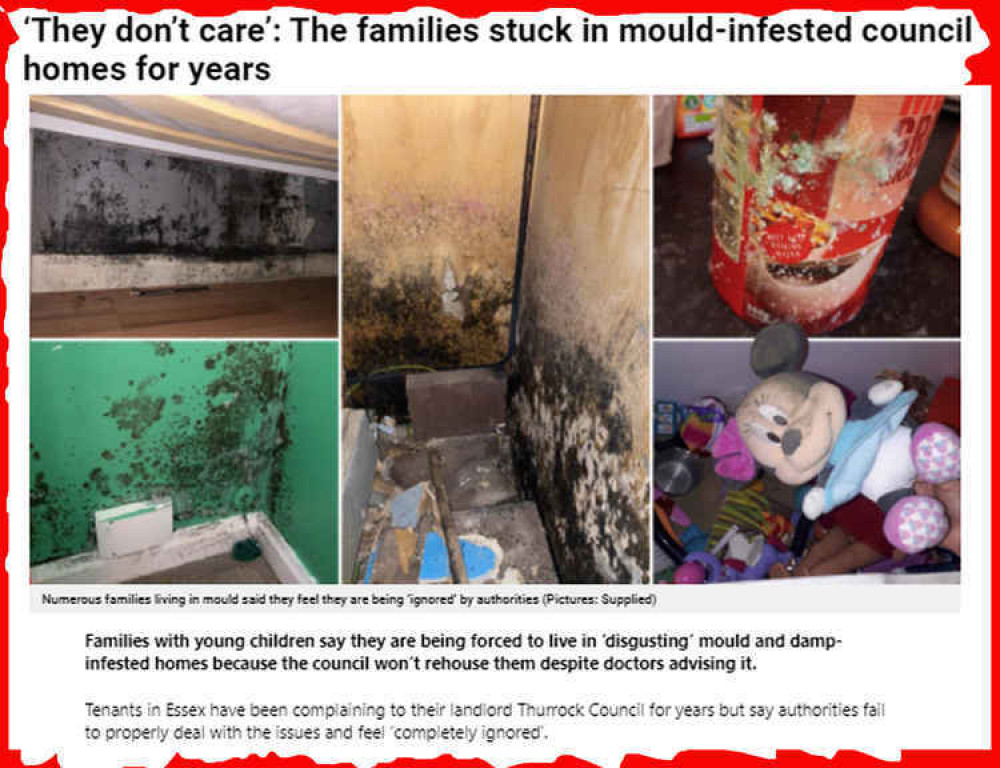 DESPITE dozens of reported cases of damp and mould having a huge impact on the quality of lives of Thurrock Council tenants – including young children – councillors will hear a report from officers that downplays the problem in the borough.

Tuesday evening's (22 June) meeting of the housing and overview scrutiny committee will hear a report from officers, led by the council's Corporate Director of Adults, Housing and Health Ian Wake, that media has been scaremongering!

That's despite the fact that the report confirms that more than one in ten council properties is blighted by the problem.

The report says: "Damp and mould and its impact has recently been widely reported by the media. There has been an indication that the number of cases are high and the council are slow to respond. However, housing repairs data demonstrates that the reality is in fact quite different.

The report adds: "Of the 19 cases reported, four were not council housing tenants. All the cases that did relate to council owned properties had remediation works planned or already completed. The investigation showed that in seven of these cases the remediation works were delayed because the tenants did not allow access.

"Five of the cases were further delayed due to the tenants involvement with "no win no fee" solicitors."

The report has been condemned by Thurrock Nub News editor Neil Speight who has personally visited many properties where children are living in appalling conditions.

Only last week Nub News reported on more problems– and we recalled the many stories we have published highlighted instances where the council has simply ignored the complaints of local people.

Mr Speight said: "Thurrock Nub News has called for a full, independently-led inquiry into the shocking state of many Thurrock social housing properties – and the appalling treatment of young families by a callous council that quite frankly is a disgrace.

"I have personally furnished the council with details of many, many instances of damp and mould reaching intolerable levels and it is shameful that the council report is simply a tissue of misinformation – or dare I say it, lies!

"Of course it's headed up by the same director who last week looked councillors in the eye (admittedly by video because he couldn't be bothered to turn up at a meeting in person) and told them a completely distorted story about the decision to cut adult social care services, so why am I surprised?"

The full report put before councillors – which claims media have retracted stories about mould when challenged by the council (certainly not Nub News!) - can be read in full here.

The report says mould blighting people's council homes has been investigated and the authority says it has concluded they are "relatively uncommon."

In a report to the housing and overview scrutiny committee the council said an analysis of repairs date for the last two years showed damp and mould repairs represented only 4.1 per cent of the total number of repairs to council properties.

Nevertheless, this still represented 1,123 council owned properties that required remedial work for this issue. This equates to 11.4 per cent of its housing stock.

Issue is not going away.

Shocking stories of botched repairs and lack of sympathy for victims

Should council call time on flats?