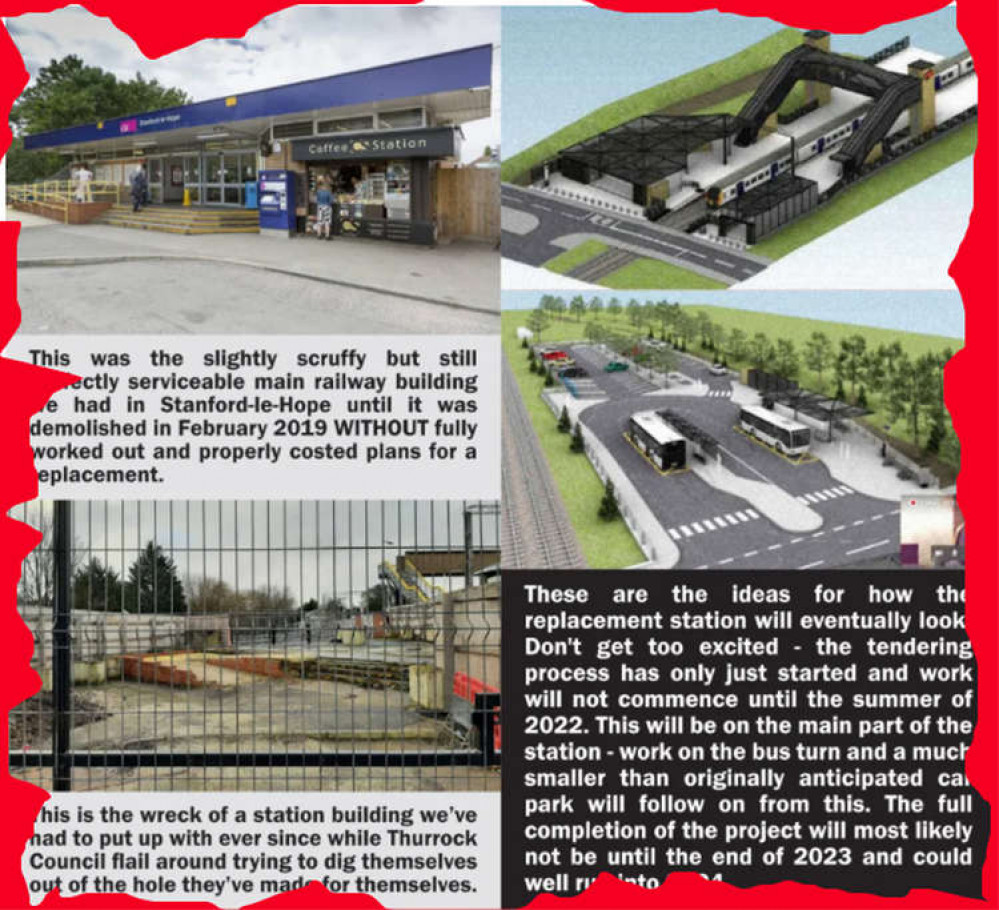 Critics of the project have frequently highlighted to council's mistakes

LEAKED documents have revealed that the cost of the much-delayed and massively over budget Stanford-le-Hope rail station has now soared close to £30 million – and it may crash through that barrier if and when work is commissioned to build stage two of the project or projected costs go even higher.

When plans for a new rail station were first mooted in 2017, the expected total cost of the project was £11 million.

After planning permission was granted for the first design of the station, which included a bus turning circle, work began in early 2019 with the demolition of existing buildings. The main building which contained the ticket office, came down in February 2019.

Once the site was left with just platforms and a portable ticket office the project ground to a halt when it became clear the designs were seriously flawed and engineering costs to deliver the scheme would have been massively prohibitive.

So the council went back to the drawing board and after more than a year came up with a new plan, to purchase land adjacent to the rail station car park and create the bus turning area there.

The costs by then had risen to almost £20 million – which caused great concern among councillors and residents and prompted the portfolio holder for regeneration, Cllr Mark Coxshall, to make a solemn pledge.

In the wake of a Nub News report that hundreds of thousands had been committed to new consultants to get the scheme back on track, at a meeting of the full council he said the scheme would be delivered for less than £20 million.

Answering a question from Labour's Martin Kerin about the rise in costs of the project, Cllr Coxshall declared his certainty that the project would be delivered 'within a 'fixed' price.

He said: "It has to be delivered within the budget envelope agreed at Cabinet which was £19.7 million from memory, just under £20 million.

"You will be moaning at me there's another consultant to actually design this contract as well, but it's got to be - we can't do this in house.

"We've got to make sure we do it properly and that's one of the lessons learned from pause and reflect on the A13."

Today (Sunday, 30 January) the stark reality is that Cllr Coxshall has delivered another broken promise by an administration that has already been damned for its major infrastructure project failings, including the A13 widening which is tens of millions over budget and years behind, schedule, the chaotic and as yet largely uncosted project to build a new extension to the civic offices and, in recent weeks, the revelation of the shambled over the recladding of borough tower blocks that has been damned as a scandal and has featured in the national media.

The projected cost of the rail station will be detailed to a committee meeting next week but today Nub News received by anonymous digital mail - from what was described as a 'disgruntled officer' - a copy of the report which shows the costs of the project.

And they may yet rise as the tenders have not been fulfilled – and there is no build cost included for the second phase of the project.

Mobility Hub option Two remaining budget £1,087, 000 Thurrock Nub News has asked councillors from within the administration and the opposition and the council to comment on the latest figures. We will bring you news of any response when it is received.

The media has tracked the rail station project since 2018.

Here is a selection of just some of the many stories about the debacle.

Restart due next spring July 2021

Consultants cost more than building! May 2020

Call for a public review

Plans will stay inside the 'current budget envelope'. March 2019

Knitters with big hearts are on fundraising trail