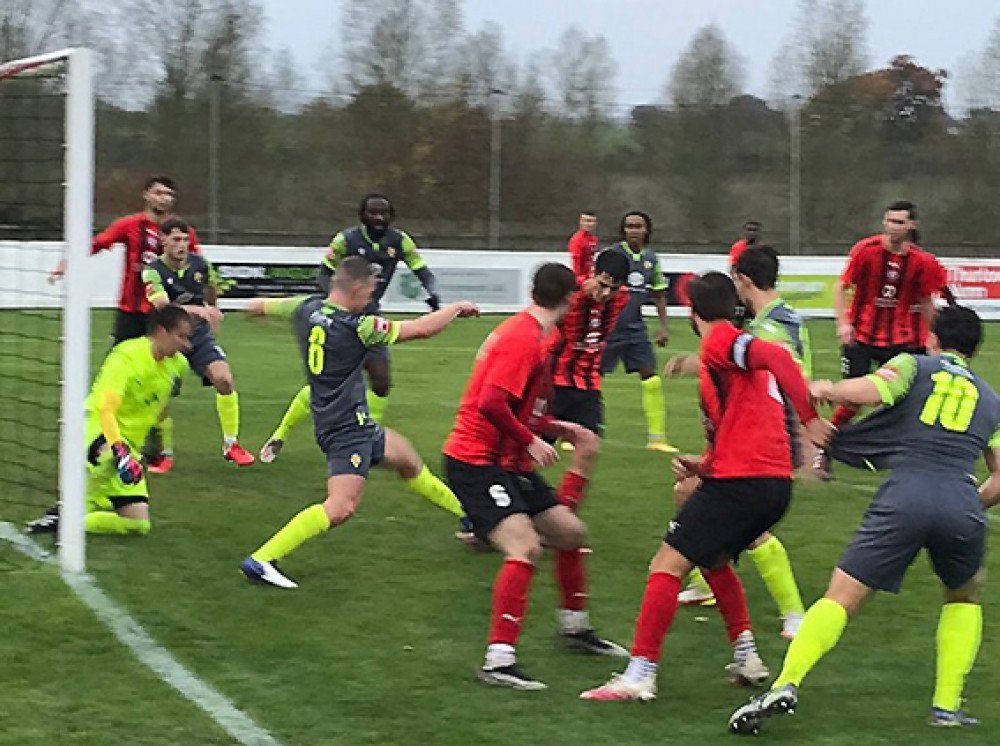 A packed six yard box as Coggeshall attempt to clear their lines.

EAST Thurrock manager Marc Harrison was delighted with Saturday's (19 November) Isthmian North win as his side bounced back from the previous week's surprise home defeat behind them and recorded a fourth successive away league win.

Afterwards he said: "We have what is mostly a young bunch of good players, and they're learning all the time, I thought they showed some real class today".

However, it was the Rocks who started on the front foot, and they went in front 14 minutes in when the impressive Amaree Robinson-Jones jinked his way down the right and crossed for Brian Moses to fire past home keeper James Askew.

Rocks almost doubled their lead shortly after when skipper Oli Spooner tried a shot from outside the box which Askew fumbled, the loose ball trundling agonisingly just the wrong side of the upright.

Town settled into the game, and drew level midway through the opening half when Jason Fuma volleyed past a startled Montel Joseph after latching onto an attempted headed clearance from a long throw, though Rocks were insistent a foul was commited that impeded the initial throw being cleared properly.

The goal inspired the Seedgrowers, and there were no complaints as they went into the lead on 34 minutes when defender Josh Hughes lost his marker and was unchallenged as he headed in from a left wing corner.

Rocks needed a lift, and it came from their first attack of the second half when Moses cut into the box from the right and was unceremoniously bundled over. The ref pointed to the spot and up stepped Harry Hope to slot the penalty past Askew.

It's fair to say the Rocks were in command at that point, moving the ball around confidently and looking threatening every time they broke forward. Moses twice had goalbound efforts well saved by Askew, and a well struck Isaac Skubich free kick took a slight deflection to leave the keeper wrong footed only to come back off the crossbar.

Rocks finally regained their lead on 73 minutes when Hope picked up a pass, broke into the box and unselfishly laid it off for a better placed Moses to crash home his ninth goal since joining in mid-September.

A fourth Rocks goal came, when with ten minutes left on the clock, substitute Tommy Barton marked his arrival on the pitch with a precision ball into the box for Spooner to head past Askew to round off an excellent comeback win. and lift the side to tenth in the table.