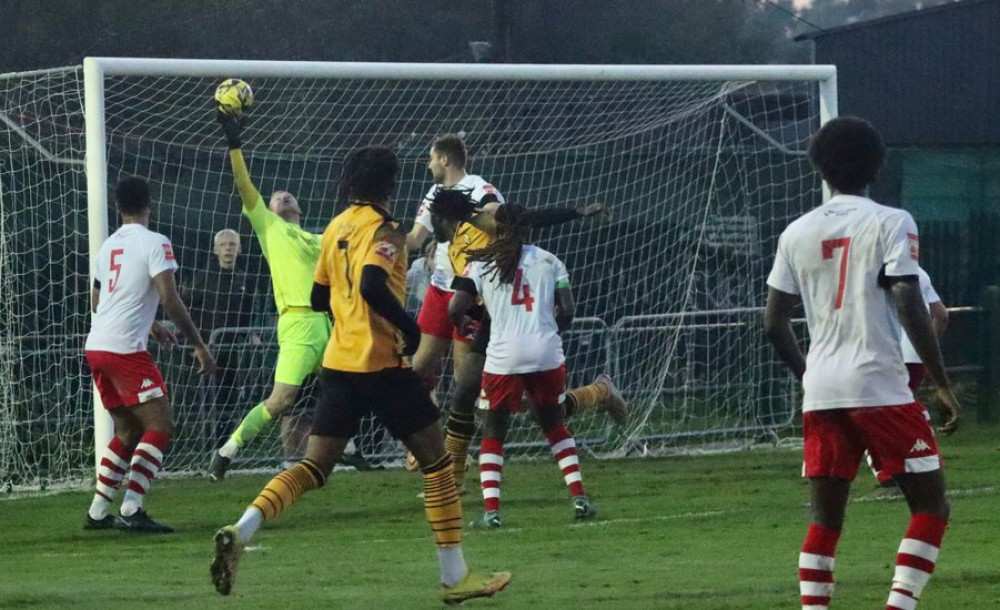 ROCKS went into this game against lowly, but recently rejuvenated Maldon & Tiptree at Rookery Hill on a five game winning run, and unbeaten in eight.

However, the Jammers showed scant regard to the stats, and stunned the Rocks by cruising into a three goal lead inside the opening 15 minutes.

The recent appointment of experienced manager Adam Flint, and recruitment of some new faces like former Tilbury striker Roman Campbell and well-rated keeper Tommy Dixon-Hodge, who was with Braintree last season, have seen a turn-around in the Jammers' form.

The player who set the Jammers on the road to an unexpected win however was one time Spurs youth and reserve midfielder Laste Dombaxe, who has spent most of the past four seasons with the mid-Essex club. With just four minutes played, he latched onto a loose ball, and from some 30 yards out, sent a screamer flying past Montel Joseph into the top corner.

The goal came as a bolt out of the blue and clearly shook the Rocks. One might have expected the visitors to have sat back for a while and consolidated their position, but no, they took the bit by their teeth and pressed men forward, and before the game was 15 minutes old they had added two more, cashing in on some uncharacteristically nervous Rocks defending to rifle in well struck goals from Campbell and Sam Coombes.

Stunned, Marc Harrison's boys just couldn't get going during the first half, and the best they could muster were a couple of off target strikes from distance.

Right on half time the visitors made it four when Scott Kemp bundled in a somewhat scruffy goal.

After some half time sorting-out, to their credit the Rocks came out fired-up and gave a much better account of themselves in the second half to restore some pride at least.

However, despite their best efforts they were unable to find a goal as the Jammers fought something of a rearguard action.

Dixon-Hodge did well to keep his goal intact as Rocks swept forward, and when he was beaten, on two occasions his defenders were in-situ to clear off the line.

Not quite the result Harrison and his assistant Liam Wallace were hoping for to mark the first anniversary of their arrival at the club.