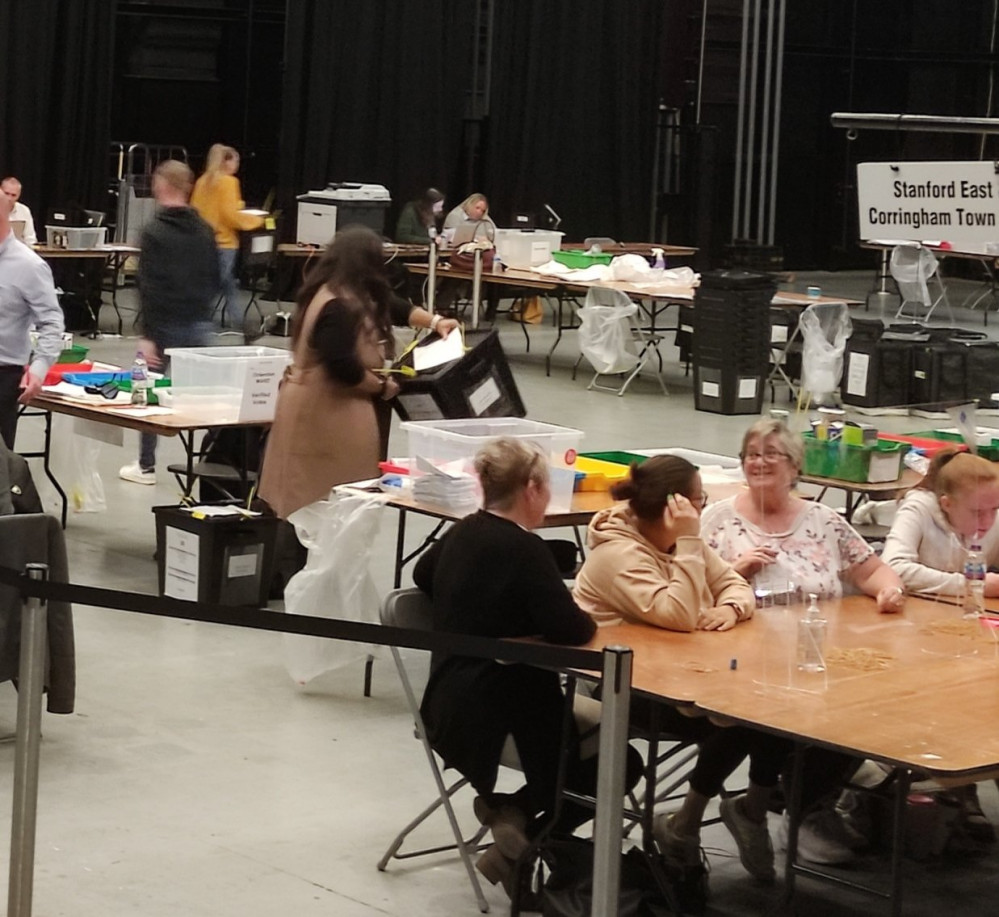 The Thurrock count at the Backstage Centre, Purfleet-on-Thames.

THURROCK Conservatives were smiling at the end of another election count in Thurrock in the early hours of this morning (Friday, 6 May) after maintaining their grip on the borough council.

Though the total number of votes cast saw the Tories and Labour virtually neck and neck, the statistics translated into three less seats for the opposition. In total the Conservative polled 12,442 votes and Labour just 91 behind on 12,351. The turn out was low, averaging 26.41 per ward - meaning effectively just one in four of the people in the borough entitled to vote bothered to do so.

Only three wards had a turn out of more than 30 per cent, with the best being the Homestead ward where it was 33.23 per cent.

Sixteen seats were up for grabs across the borough and though there were some disappointments for the Tories, there were also some gains. Overall they won nine of the 16 seats available.

It was a bruising evening for Labour, who had hopes of paring the Conservative majority, but ended up with one seat less than they started and now have their least ever number of seats on the council.

And it was an evening that independent councillor John Allen will remember, winning back his place on the council after standing as a non-aligned candidate and taking out Labour's longstanding Tilbury Riverside councillor Bukky Okunade.

The election's other independent candidate, Ross Byrne fared less well in Stanford East and Corringham Town. Hopes were high from his supporters that he might add to the Independent Group's remaining three councillors but incumbent Tory Alex Anderson was a convincing winner with 824 votes. In fact Mr Byrne, whose father Gary is the Indys' group leader, didn't even make second spot. That went to Labour's John Cecil with 524 and Mr Byrne trailled in third with 427.

In West Thurrock & South Stifford Conservative Qaisar Abbas held the seat he won for Labour in 2018. Earlier this year he was deselected by the Labour group so switched his allegiance to the Tories and had the last laugh when the result was announced this morning, retaining the seat for the Conservatives - their first win in the ward since 2004!

The re-election of Conservative leader Rob Gledhill in Little Thurrock Rectory was perceived a potential banana skin for the Tories and they threw everything they had into the election campaign, blitzing the area with leaflets and lots of canvassing and it paid off as he held the seat by the relatively comfortable margin of 157 votes.

At the end of the evening Cllr Gledhill was delighted with his party's performance and said: "This was a historic night for the Conservative Party in Thurrock, thank you to the residents of Thurrock for supporting us.

"Residents see our positive vision for the borough, one of the lowest council taxes in the nation, the coming Freeport to the borough and delivering the significant investment from the Government via the Towns Fund plus other funding."

The Conservatives gained Belhus and South Ockendon wards, echoing the recent Tory trend in the area.

Labour's Mike Fletcher stood down in Belhus and the seat went the way of the Tories with young candidate George Coxshall edging out Labour's Mark Hurrell by 42 votes. Current borough mayor Cllr Sue Shinnick decided not to stand for Labour in Ockendon, which also went blue as Paul Arnold won by 144 votes.

Cllr Shinnick will be returning to the council chamber - if its new civic extension is completed in time for the new Mayor-making on Wednesday, 25 May - as she provided one of two high spots for Labour by winning in South Chafford. She took out another Labour defector to the Tory ranks, Abbie Akinbohun, by 131 votes.

Labour leader Cllr John Kent said: "It is disappointing to have lost seats and I want to thank Bukky Okunade for her 16 years of service to the community in Tilbury Riverside and Thurrock Park.

"Thurrock Labour has made steady progress in most places and we are delighted to have a councillor elected in Aveley for the first time in over 20 years and to have won in South Chafford for only the second time since 2004."

Check out the full ward results: